I worked on 3 issues of the Embrocation Cycling Journal as the Art Director and Graphic Designer in collaboration with Tyler. We did everything from conceptualizing articles, writing stories, making illustrations, taking photographs, sourcing out content both visual and written and laying out the magazine.

﻿Here are some excerpts:﻿﻿

﻿Covers. The magazine is in a landscape format. Front and back covers are one continuous image.

This “memoir” was the result of a collaboration with Heather McGrath and Gregory Ralich. It is based on the true story of a bike accident, its consequences and realizations. It is written in a farcical tone and is absolutely hysterical. The photographs were all staged for the article.

This article was a visual documentation of the changes in bicycle parts and a tool from the late 1890’s early 1900’s to the most recent in the industry. I visited the Charles River Museum of Industry & Innovation in Waltham, MA and met with their bicycle specialist Bob Howatt to look at their collection of old bikes and parts with the hopes of writing a story. I left overwhelmed with information and had no idea what to do with it. Not being a writer I conceived of the idea of juxtaposing photographs of these objects that were made around 100 years from each other for the viewer to see the differences or lack thereof. I went back with Tyler and we photographs the selected objects side by side. They included pedals, cranks, forks, speedometer, lights, locks and a tool.

I approached an old friend from Venezuela, Bert Tosh, with the idea of writing an article on Kraftwerk and cycling. He obliged and I paired his writing it with photographs of that year’s Tour de France by Dave Chiu and Jeremy Jo.

While doing some research on cycling related beer labels, I came across Steve Malone. He is many things, among them a collector of cycling ephemera. I wrote to him asking about his collection. This ended up in a month long correspondence with him through which he not only shared images of his beer labels but also related the story of collecting them. I attempted to find someone to write the accompanying text but to no avail ended up writing the story myself. I also drew some illustrations for the article.

The clavicle is the most frequently broken bone by cyclist. This was a visual spread of x-rays and chests that had incurred in such fracture.Tyler and I rounded up several victims we knew and borrowed their x-rays and photographed them.﻿

﻿﻿Carolina Fontoura Alzaga is an artist who makes the most incredible chandeliers from old bicycle parts. This article was about her work. The photographs were taken by Alan J. Crossley.

Again, doing research on cycling related fonts I found “Velodromatic”, a typeface that was designed by Anton Koovit based on a velodrome in Amsterdam. This was an article on such font including his original photographs that served as source material for the design.

The magazine was divided into three sections: reflections, features and distractions. Each section had its parameters for content. This was an opportunity for editorial images to be used. These are a few examples of images I made for them: 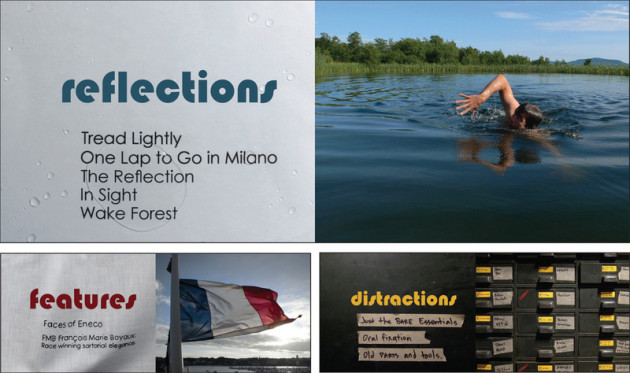