I was asked by Firefly to design and build out their new 3,750 square foot shop in Boston. This involved everything from conceptualizing the space, designing walls and electrical diagrams, hiring contractors,﻿ building custom furniture and workstations, purchasing appliances, installing track lights and painting graphics on the walls to installing their first art show.

The goal was to create a space that brought together art, design, manufacturing and bicycles into the heart of the city.

This is the area you encounter upon entering their space. It includes a gallery, office, fit studio, kitchen and bathroom. 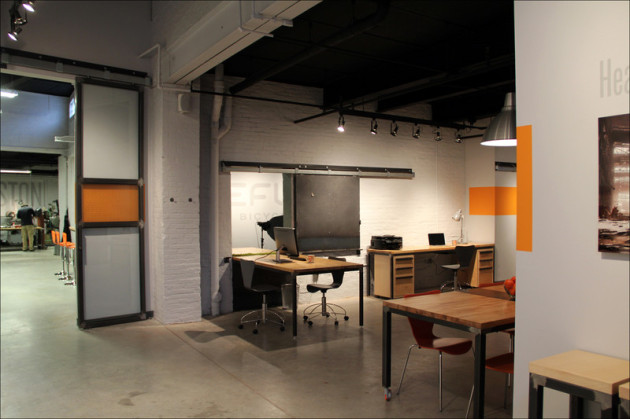 The space is divided into four conceptual and physical areas: 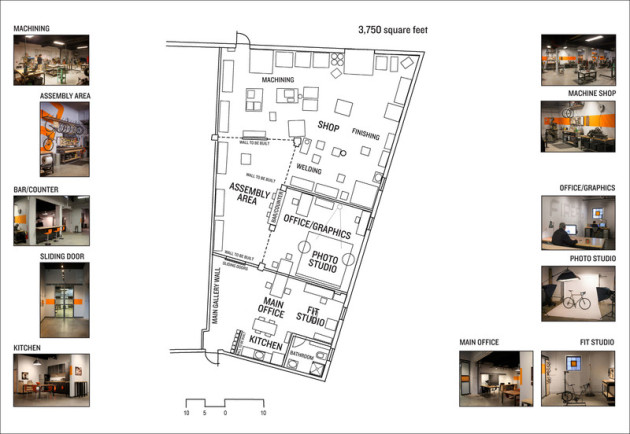 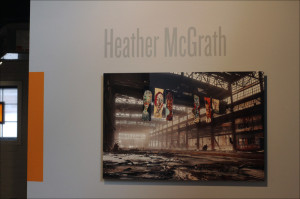 As you enter the front door to your right is a 6’ gallery introduction wall and to the left the 24” long main gallery wall. The introduction of a gallery space adjacent to the front office and fit studio creates the opportunity for Firefly to showcase, on a quarterly basis, other local talented artists and craftspeople, broadening the company's community and surrounding them with visual inspiration on a daily basis.

Between the front of the house and the shop are two, ten-foot tall sliding glass doors. These doors not only create a visual threshold but also serve to functionally reduce noise from the machine shop.

﻿A pattern created from their logo was applied to the center panels of the doors. Firefly’s main marketing tools are social media and word-of-mouth. They are constantly photographing the process of making the bicycles, their everyday shop life and the finished product. Their shop therefore becomes a backdrop to such documentation. Their logo and graphic details in Firefly’s signature color palette were painted on the walls to further create a familiar sense of place in all of the process documentation photographs. 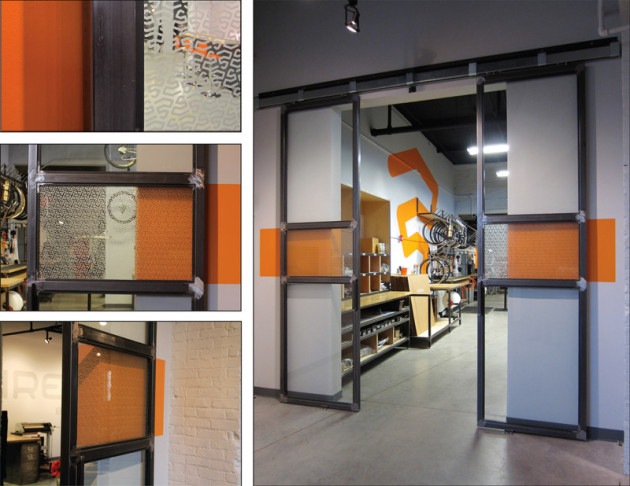 Part of the design process was to build walls to create the separate spaces. Here are the entrance wall elevation, sketches of the doors and a time lapse of the wall/doors being built and installed. 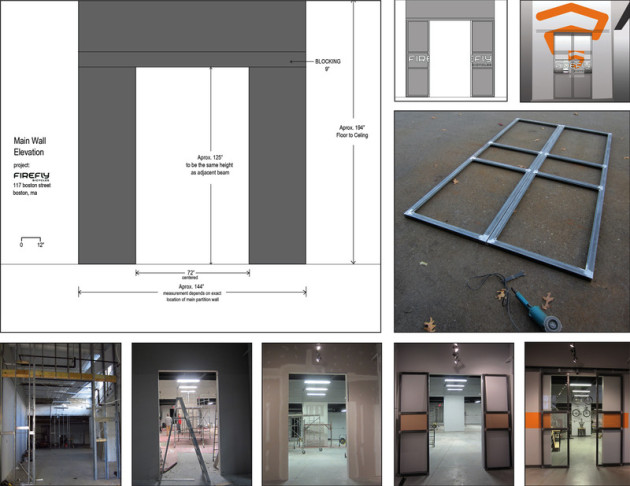 To the right is the main desk in the office with a 4’x4’ sliding metal panel. This architectural element serves multiple functions. Like the large glass doors, it creates a sound barrier when needed by separating the office from the photo studio on the other side. It also slides in front of a large dry erase board concealing during events or tours, the bicycle order list and build details. When opened, a moss-lined pass-through is revealed leading to an attached meeting table cantilevering out into the photo studio, connecting, and at the same time separating the two environments. Originally the passage in the brick wall was filled in with cinder block. Demolishing the cinder block was a decision made early in the design process. 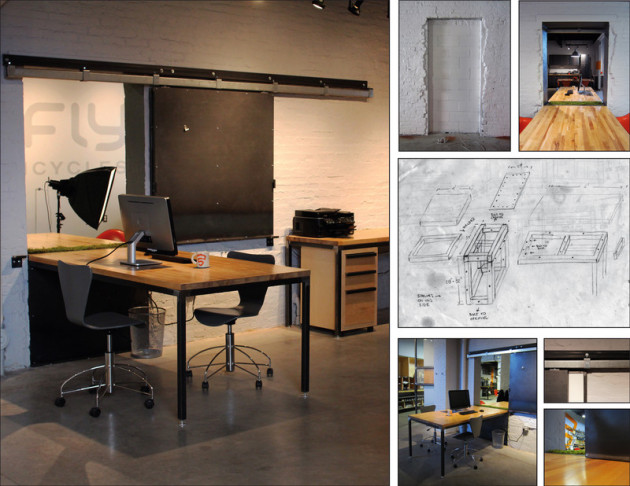 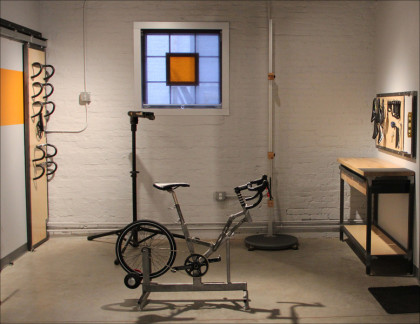 Beyond that is the fit studio.

The fit studio includes a secondary desk with drawer/file cabinets, a sliding door to conceal the water heater that is also used to store handlebars for the fitting process, window security grate, the fit station with tool board and an additional storage drawer/cabinet unit that overlaps with the kitchen. 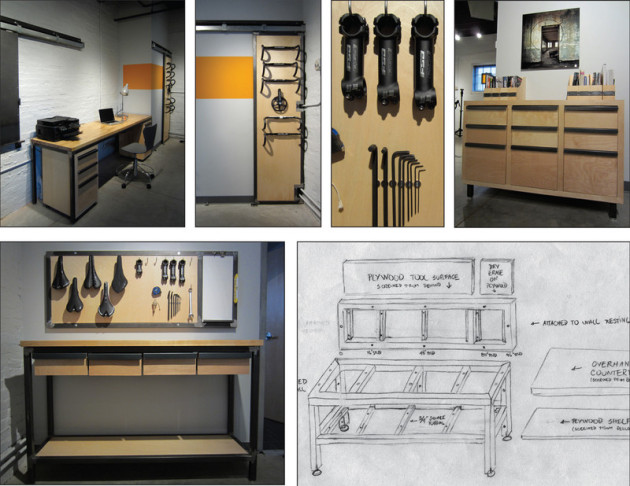 The furniture throughout the shop was custom designed and built out of a small palette of inexpensive materials to both work within the budget and unify the space through the materials.﻿﻿ 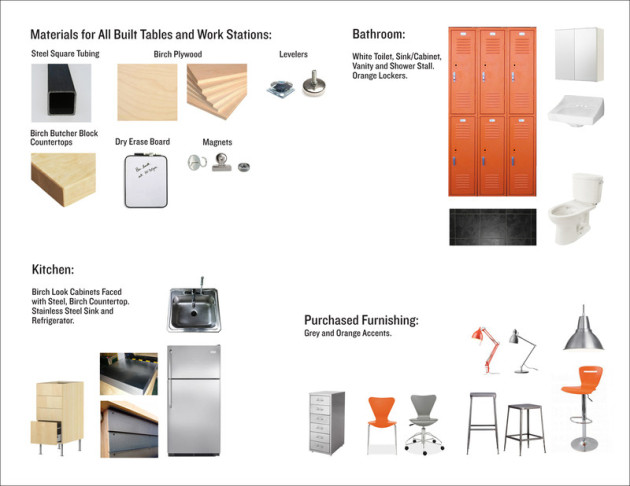 The kitchen cabinets are faced with steel and have custom drawer pulls. The table provides a place to have lunch, have a meeting or serve food/beverages during a gallery opening. 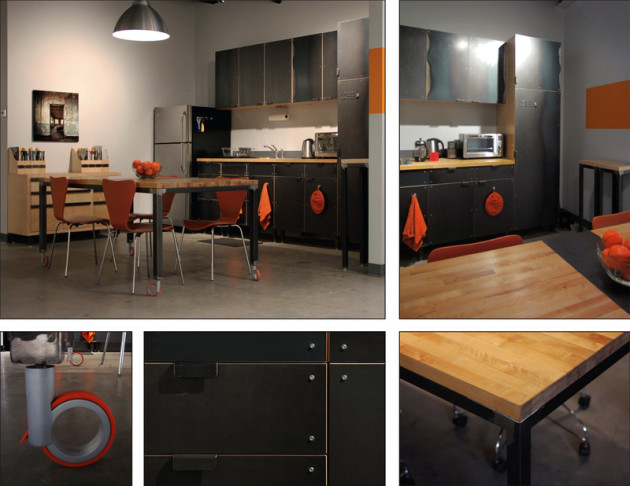 A view from the kitchen through the door to the assembly area. The assembly area with elevated ceilings comprises the staging area for parts on upcoming builds, shipping and final assembly stations and a bar/counter that separates the photo studio and secondary office area. 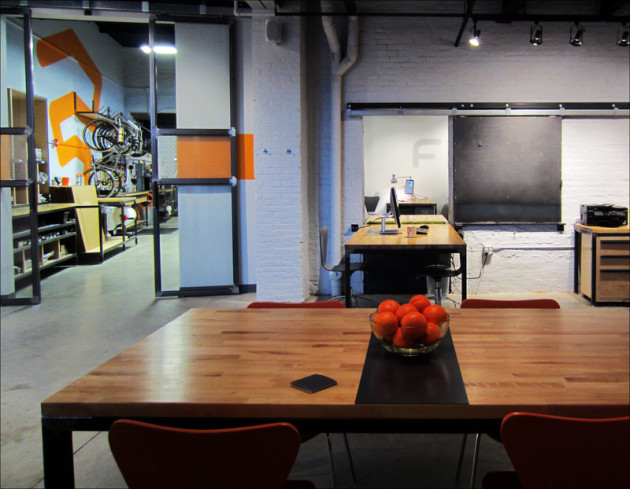 Throughout the space I wanted to make a place for everything and put everything in its place. That was of a general design consideration but specifically important in the workstations.

The parts staging unit was designed around the specific parts it would store, they included wheel boxes on top, followed by cubbies for small parts separated by customer, below a shelf for forks and handlebars and at the bottom spaces for fenders, racks, etc. Above, a sketch of the parts staging unit taking into consideration the sizes of all the objects that it would house. The shipping station below fits their bike boxes and has a built in bubble wrap holder.

Between the shipping and final assembly station I painted a large Firefly logo. I originally thought about placing it on the sliding door wall but as time passed, I thought this space was better suited for it as it is the heart of the space.

The final assembly station features a tool board, frame/wheel hanging rack and floating wheel-building table. All tool boards use a combination of custom made pegs and magnets to hold up the tools. They also include a dry erase board portion to make notes on inventory. 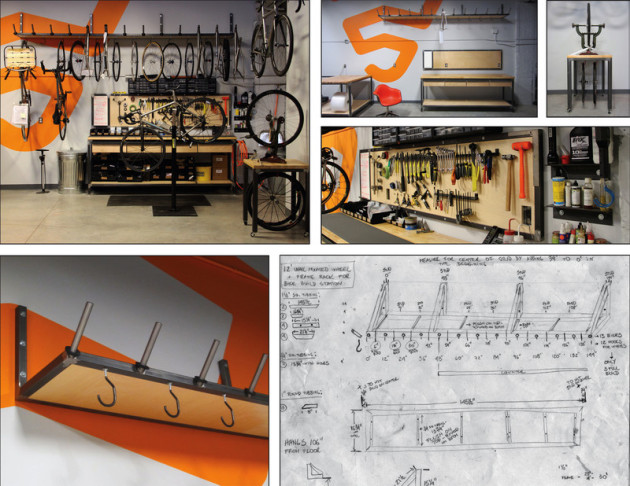 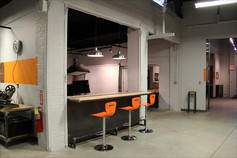 Opposite to the assembly area is an elevated bar with stools that overlook the photo studio and graphics space. The bar creates an informal area within the shop to discuss new ideas, chat about frame finishes, and sip a brew after a long day's work. The backside of the bar steps down to a lit surface that is used for creating the vinyl masking to be applied to the frames or as a DJ counter during events.

Before and after shots of the bar, a sketch, a process image and some details. 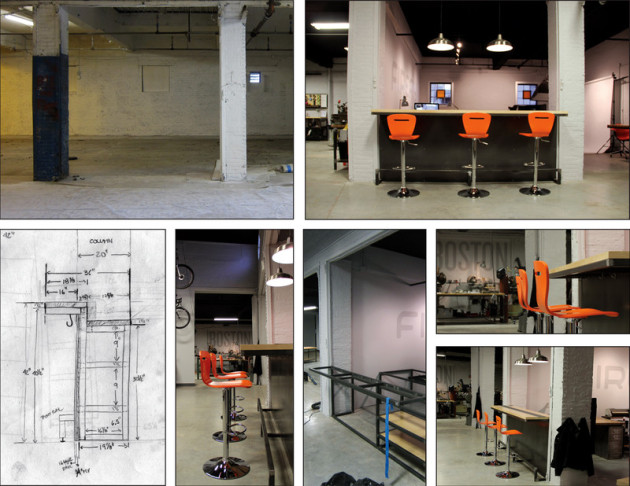 On the other side of the counter are two more desks with cabinets, vinyl cutting station and photo studio. 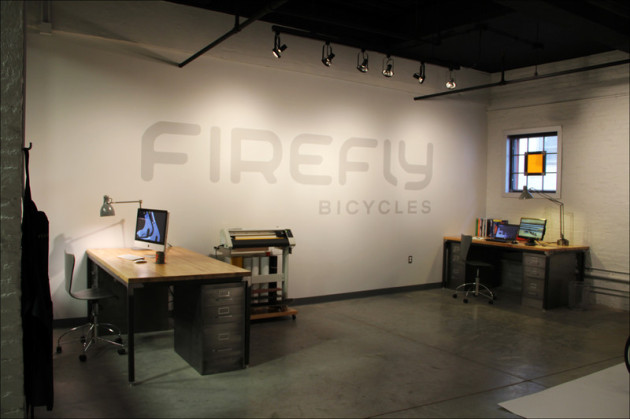 Looking into the assembly area from the office/photo area. 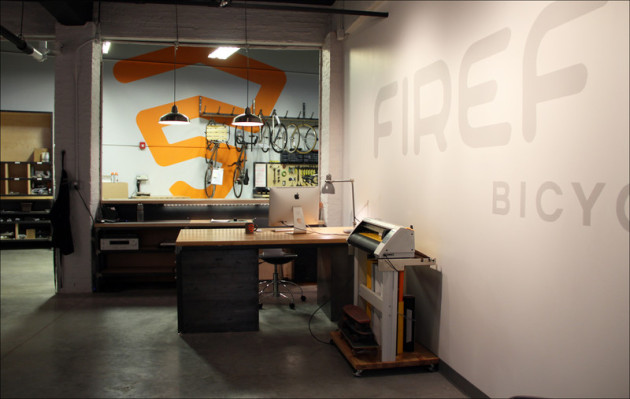 ﻿Around the corner, in the back of the space is the L-Shaped manufacturing area with slightly lower ceilings where the frames are machined, welded and finished. This area was designed to be a tight and efficient work environment divided into purpose built stations each specific to a set of tasks. Here is the tapping, facing and reaming station. 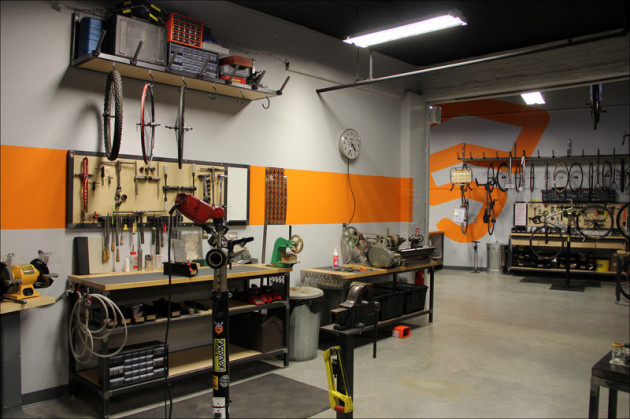 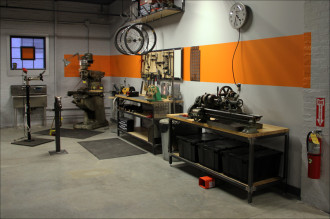 The shop was designed to support the work flow while also being aesthetically pleasing. The idea of taking aesthetic considerations into a shop environment was a really exciting challenge. While there exists both, well designed high-end bicycle fit studios and well set up frame fabrication facilities, in my research, it was difficult to find a space that did a good job of integrating both in a purposeful, functional and aesthetic way.﻿﻿

For the design of the shop I first evaluated their old shop set up which was in a subleased space. The space served them well as a launching pad but its layout was not practical and led to many inefficiencies. To determine the layout of the new shop I had to first get a grasp on the process of making a bicycle from beginning to end. I did this by spending time in the shop while they built frames, taking notes, asking questions and paying careful attention to which machines and tools were used in each step. My goal in the shop area was to create an efficient flow of production through the space, for it to be as practical as possible and to minimize frame production downtime during the move. 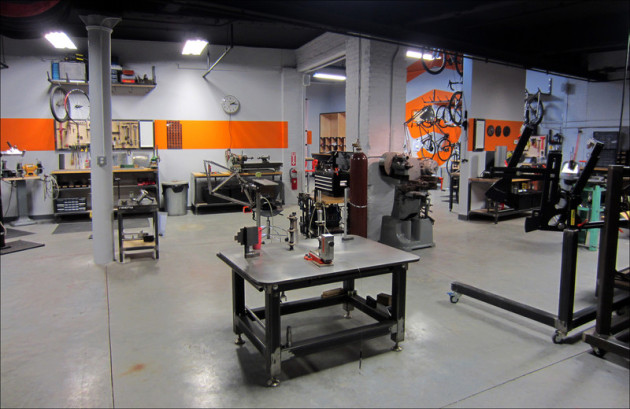 The machines themselves  served as a source of inspiration as they are gorgeous. I felt a certain responsibility to glorify and honor them in the space. 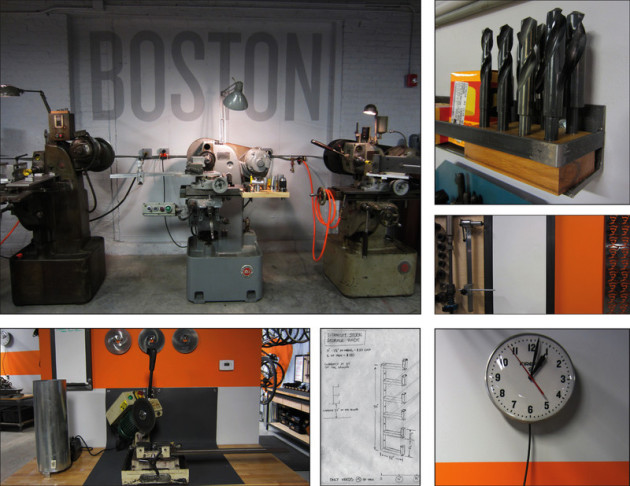 From the shop looking through to the front door. 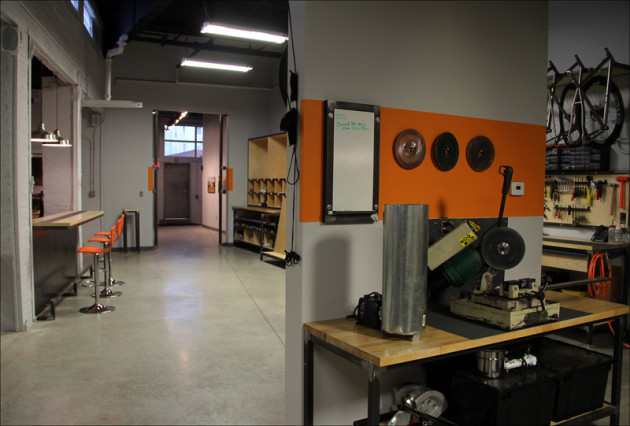 The bathroom included a shower, old high school lockers and a changing bench. 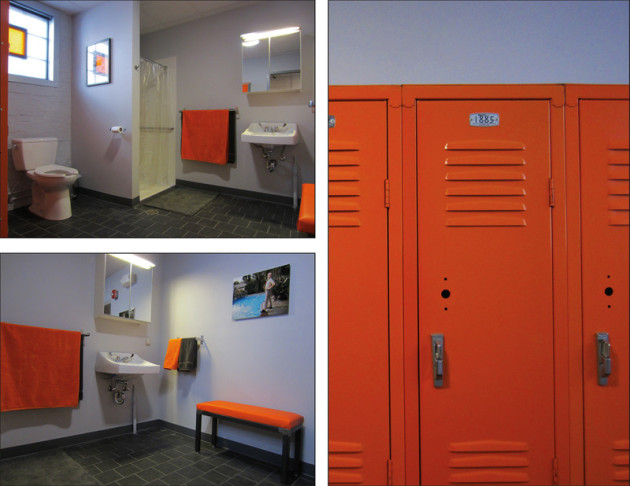 Here are some process before and after shots:

For an eclectic, fast and furious, daily and live documentation of the process during the build out, check out:

FireflyBuildout from Alessandra on Vimeo.

For final images of the buildout, check out: