I have always held my hands in high esteem. They are for me what allows me to be a maker, a hands on person who transforms materials in order to express myself. But, I also use them very energetically when talking and have recently been looking at them as a form of communication.

Hand gestures are a form of nonverbal communication which are used to convey particular messages, either in place of speech or together and in parallel with spoken words. They are culture-specific and can convey very different meanings in different social or cultural settings.

I made these cards and called the series “enough said” because I think no words are really necessary, I hope the graphic nature of them says it all.

All the cards are handmade and are a standard A6 greeting card size (4½”x 6¼”). Each one includes a grey envelope that matches the pop- up hand and comes packaged in a crystal clear protective sleeve. The front and inside are blank. They are available for sale on Etsy. Roxbury, MA. 2011. 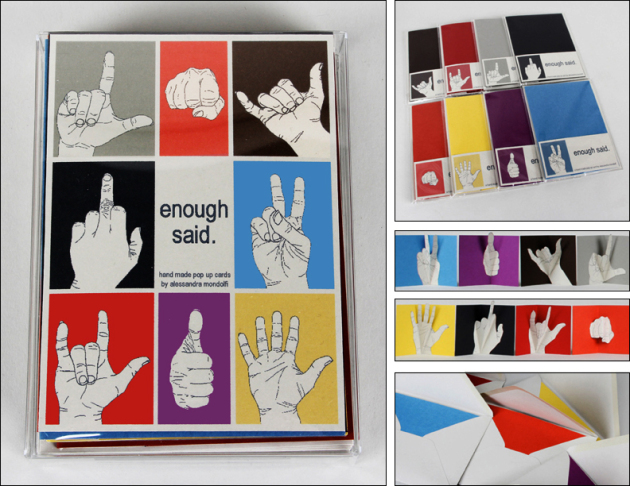 The collection consists of one each of the eight “enough said” cards: The Finger, Thumbs Up, The Dap, Peace or Victory, Ily, High Five, Shaka and Loser. 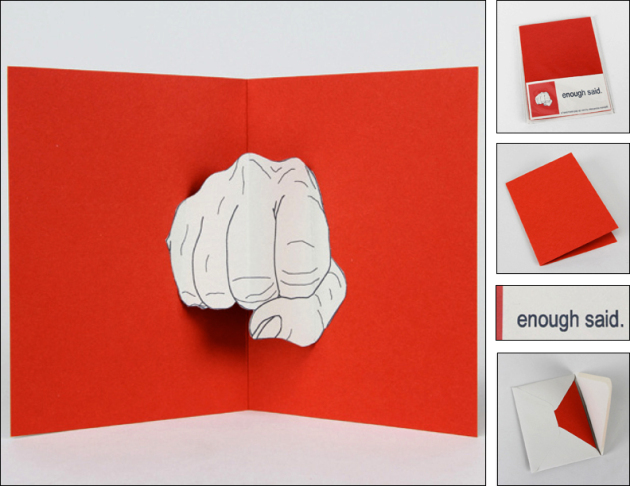 Dap is a form of handshake and friendly gesture that has recently become popular in western cultures. It is a ritualized but common form of agreement between two or more people who offer this casual physical contact as an affirmation, congratulations, or other type of agreement. 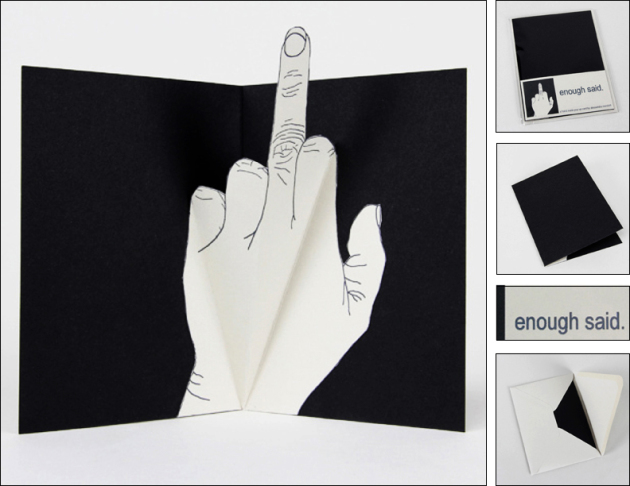 In Western culture, the finger (as in giving someone the finger), also known as the middle finger, the highway salute, the Bronx salute, the one-finger salute, the bird (as in giving, flipping, or flying the bird), flipping off someone, is an obscene hand gesture, often meaning the phrase "fuck you" or "up yours". 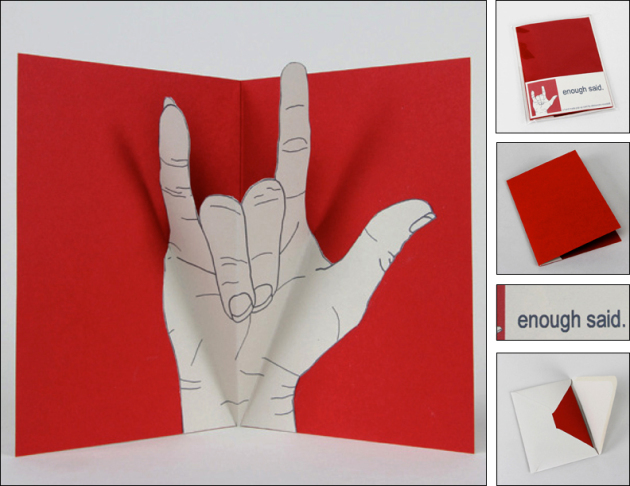 The Ily is a sign from American Sign Language which, as a gesture, has moved into the mainstream. The sign is a very informal way of expressing a number of positive emotions ranging from general esteem to love for the recipient of the sign. 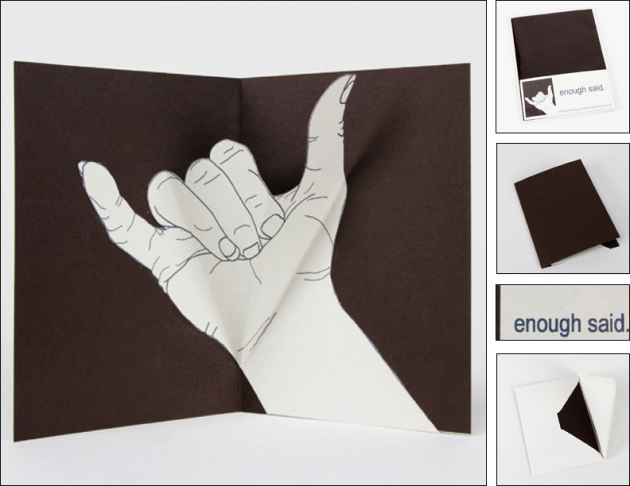 The shaka sign is a common greeting gesture meaning "hang loose,". It can also be used to signal "hello", "goodbye", "till next time", "take care," or "all right!". 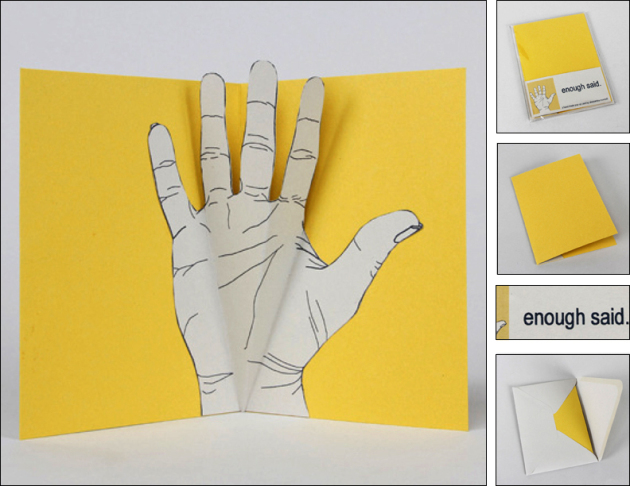 The high five is a celebratory hand gesture that occurs when two people simultaneously raise one hand, about head high, and push, slide or slap the flat of their palm and hand against the palm and flat hand of their partner. The gesture is often preceded verbally by the phrase "Give me five" or "High five". 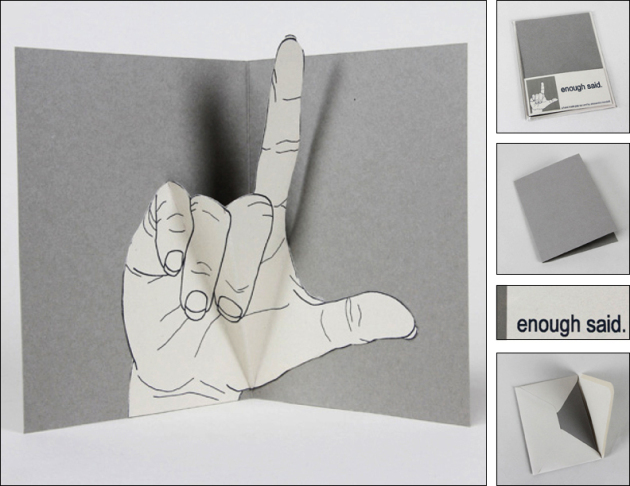 The loser is a hand gesture made by extending the thumb and index fingers, leaving the other fingers closed to create the letter L, interpreted as "loser", and generally given as a demeaning sign. Sometimes this is accompanied by raising the hand to the giver's forehead. 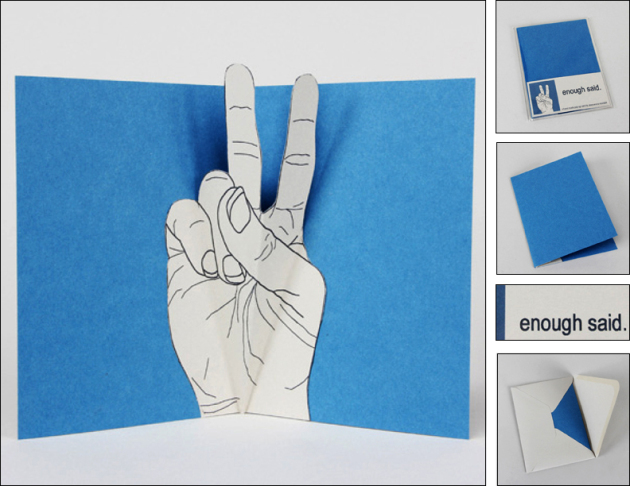 The V sign is a hand gesture in which the index and middle fingers are raised and parted, while the other fingers are clenched. It has various meanings, depending on the cultural context and how it is presented. It is most commonly used to represent the letter V as in "victory" or as a symbol of peace. 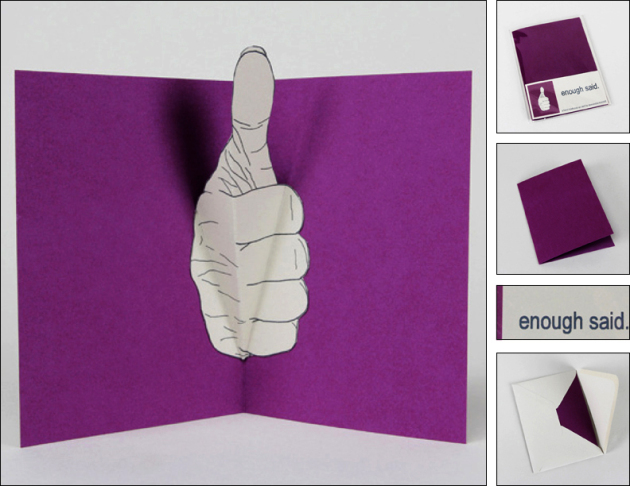 A thumbs up is a common hand gesture represented by a closed fist held with the thumb extended upward as a sign of approval.